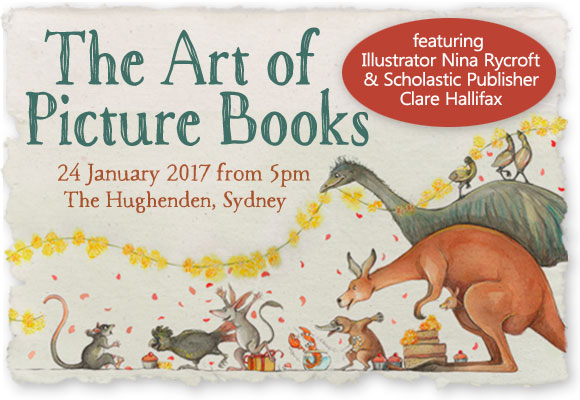 The Art of Picture Books

I had the pleasure of attending my first event as a new member of SCBWI, an array of letters that I can’t quite get into a fluent acronym!

I was welcomed by Susanne Gervay and we all sipped cool glasses of water after coping with the thick, enervating Sydney heat. As we moved into the main area, the trickling cascades of water from the fountain outside in the courtyard became rivers of water as the cool change arrived and with it, the welcome rain.

The Society organised two great speakers, firstly Clare Hallifax, Publisher with Scholastic and then an illustrator, Nina Rycroft. Clare spoke about her company and what she reacts to, when she reads a manuscript. She emphasised the importance of having a passion and speaking from your heart, always keeping an awareness of the joy of images.  I found it interesting that she spoke about the role of illustrator notes and particularly about the audio elements and the creation of music in the text itself.I also noted her advice about using humour as well as cute fluffy animals, while avoiding lecturing or moralising.

Nina Rycroft gave great insight into the role of the illustrator and provided screenshots of some of her preliminary sketches and story boards. If you are a writer only and not an illustrator as well, I think that the whole process of the production of the images is a bit mysterious and often out of your control. Some of the issues in interpretation, collaboration and flexibility were pointed out by some experienced members.

I had travelled down from Scone to Sydney but there were others who had travelled further because this was such a great opportunity to have work assessed and to meet other members. I hope to be able to get to the next event at Luna Park.