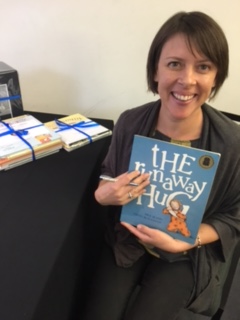 These were the imperatives promoting the CBCA event in Sydney on Tuesday 28th March at Rydges Hotel , where the short list of books in various sections were announced.

The keynote speaker was Freya Blackwood , who has been involved in the production of 25 Picture books. She began her career working in special effects on ‘The Lord of the Rings’ trilogy but fortunately moved across to illustrating. She is a rising star in children’s publishing and was named winner of the prestigious  Kate Greenaway medal in 2010.In 2015 Freya was awarded three medals , two as co-author with Libby Gleeson and one as an illustrator of the book ‘My Two Blankets’ which won the Picture Book of the Year. This was the first time in the Awards sixty nine year history that a single creator had been named three times in a single year.

Freya spoke delightfully and humorously about her life in Orange and about her illustration process, balancing family life with time to escape to her studio, where she is free to work some magic and create. Her drawings relate very honestly to family life, with recognisable domestic chaos and mess. She spoke about the 2017 theme for Book Week, ‘Escape to Everywhere’ and related the theme to a number of books, such as Emma Allen’s ‘The Terrible Suitcase’ with its fantasy of space flight. Freya is designing all the posters for this year’s event.

She also spoke about her recent Picture Book ‘Molly and Mae’, and the design focus centred on a train journey, a metaphor that expands the connection between the two young girls and their developing friendship.

Freya generously spent some time signing books, and I asked her to sign my copy of ‘The Runaway Hug’. I had been in Sydney that week with my three grandchildren and I felt that her scenes of domestic chaos, as she takes the reader from room to room, dodging toys, papers, books, peanut butter and items of clothing, so closely resembled my situation, that it made me smile.

After Freya’s talk, there were presentations from Victoria Roberts, Sue Whiting, Judith Ridge and Katrina McElve 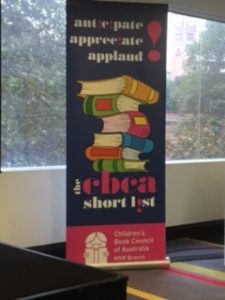 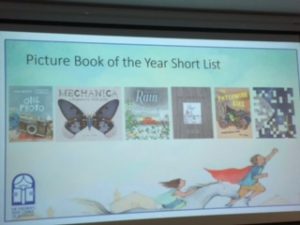 y, explaining the parameters for each category and then detailing the books that they thought should make the short list, although as they pointed out, some of their selections had not made it to the CBCA Notables list published earlier.

The parameters for the short list are perhaps useful for authors to keep in mind; books with a definite plot,wonderful illustrations, elements of rhyme,rhythm and repetition, characters children relate to and books which make children laugh or cry, elicit discussion and demand reading!