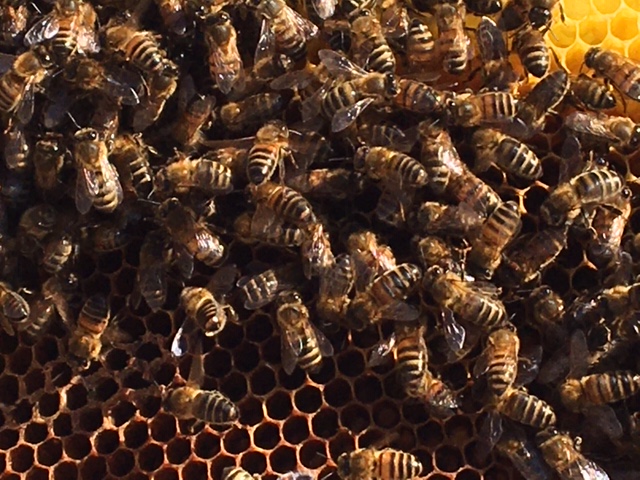 While checking on the cattle, he spotted a strange shaped object hanging precariously from the trunk of a towering white barked eucalypt.

On closer inspection it was a beautiful, fragile creation, white folds of wax creating a hive for many busy bees inside. The wax was built in layers and when seen up close, they were like the chambers of a Spanish cathedral or the stalactites of the Jenolan Caves. 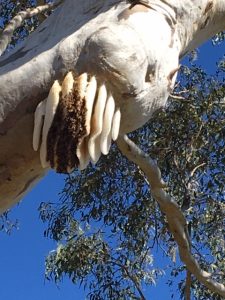 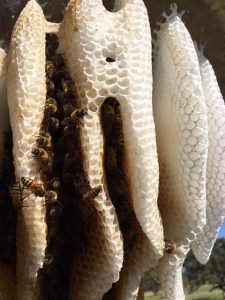 ave 2 came back on Saturday with one of his bee boxes, a ladder, rope, wire and all the gear a beekeeper needs to ward off stings.

While Dave 1 held the base, Dave 2 propped the tall ladder against the tree and tied it on with rope. Having lit the smoker, he climbed back up and puffed away at the bees in the white wax creation. He slowly cut off one of the shells and brought it down to the box, lowering it and the bees into one of his frames.

He did this one other time then climbed back up with the box under his arm.

He wired it to the top of the ladder and puffed a bit more.

Then he scooped up the last of the bees on the wax shells and found to his delight, that he had the Queen. 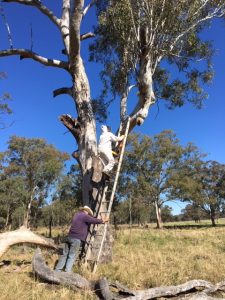 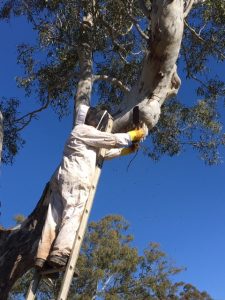 It was an easy step then to persuade the whole colony to follow her into his bee box.

We checked the next day and they seemed very quiet and happy with their new home which will not be as fragile as the original, but of course not so beautiful. 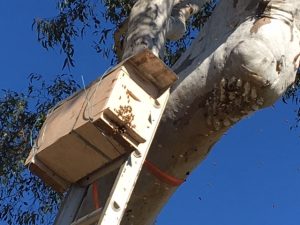 We hope that the flowering clovers, vetch and blossom will provide food and nectar for our relocated bees.

And one day, we might be able to taste the honey.