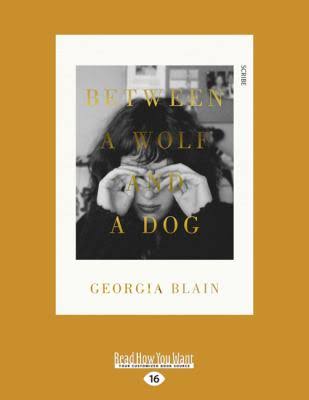 Between a Wolf and a Dog

Georgia Blain… ‘Between a Wolf and a Dog’

I have just finished reading Between a Wolf and a Dog, written in 2016 not long before the author died of a brain tumour. Georgia Blain documented her last days in some moving articles in The Saturday Paper, but it was still a shock to hear of her death in December. And then 3 days later, her mother, writer and broadcaster Anne Deveson also died, having suffered from dementia for a number of years.

Blain left behind a great legacy, a long list of books. I remember reading Closed for Winter and admiring the understated prose and later I read Candelo and Names for Nothingness, but I had not read any of her more recent works.

This latest book is so full of irony that it feels uncanny and Blain herself was shocked to hear of the diagnosis of a fellow writer, Rosie Scott, and she wondered if she should withdraw the novel from publication. Then just a few days later, she herself was given the same diagnosis of a brain tumour.

Gail Jones said the novel ‘is a beautifully tender exploration of the complications of family love, self knowledge and the struggle for forgiveness’ and all these elements stand highlighted as if in bright marker pen, because of Blain’s own death and the parallels with her own life and family.

The themes of grief and forgiveness are played out in her other works but here the prose is graceful and the images sometimes make you gasp. I react this way also to Gail Jones’s prose, where every word seems to be meticulously chosen and every word carries weight. The suburban setting is described thus: ‘a car turns off the street, the hiss of its tyres on the wet road soft in the silence. The branches of the she-oak scrape on the roof, a familiar groan of bark on tin and then the rain begins again…’

The title refers to a French phrase, l’heure entre chien et loup, the twilight time when dogs could be mistaken for wolves and friends confused with enemies. The novel moves slowly through one day, infused with images of water, but the chronology is so interwoven that the back story slides in seamlessly.

I wept at the end but there is no sentimentality, just tenderness and Blain brings the novel full circle, repeating the words of the opening chapter: ‘a mauve light, deepening like a bruise, the cold breath of the wind a low moan in his ear.’