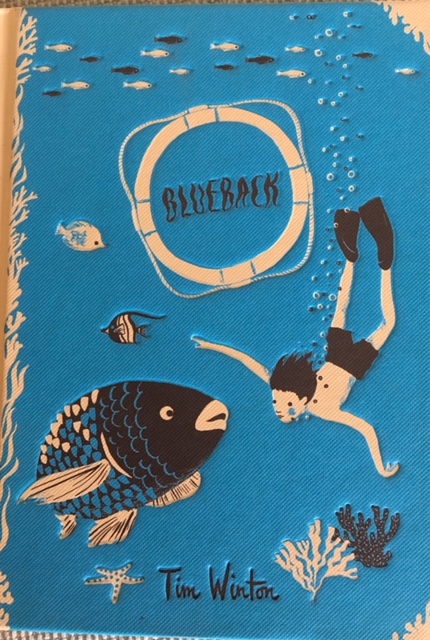 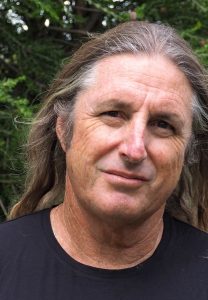 But he has also written books for children and I remember reading that in his studio he has three tables that he moves between…one for adult fiction, one for non fiction and one for children’s stories.

In 1990 he published Lockie Leonard Human Torpedo followed by Scumbuster.

In 1991 he produced the Bugalugs Bum Thief as part of Aussie Bites and in 1998 The Deep.

Blueback was first published in 1997 but re-published in 2014,  because, as Penguin stated ‘every so often there comes a story so brilliant and lively and moving that it cannot be left in the past.’

It is a beautiful hard cover book that has great endpapers as well as double page spreads between each chapter highlighting images of the sea….sea stars, fish, seaweed, shells and sea horses.

Able is ten and he and his mother dive every day for abalone. Underwater he sees ‘orange starfish and yellow plates of coral (that) glowed from the deepest slopes where his mother was already gliding like a bird.’ One day out of the corner of his eye , Abel sees a blue shadow and then a huge mouth and an eye the size of a golfball. He is spooked but reassured by his mother that it is a blue groper and the fish allows her to touch and feed it.

Able leaves to go off to school but comes back each holiday to swim with Blueback. He also becomes aware of the threat to the fish and the whole area as developers begin to swarm. The story follows him as he moves on to university ‘to figure out the sea’  and to become a marine biologist.

When he returns home with his new wife, he sees that his mother is becoming frail. But she is still full of fight and determined to have their area declared  a marine sanctuary.

She became too weak to dive and the day before she died, Abel carried her to the shore, cradled her in his arms and ‘let her float against him in the clear still water.’

‘A long blue shadow swerved into the  shallows and swam round them once stirring up the sand like confetti against them’. ‘He was the colour of all their dreams.’

This is a very touching story that follows the life of a boy who has lost his father and is very close to his mother. It explores the environmental themes that Winton has become well known for. The language is simple but lyrical and I think that it would be a great middle fiction novel for anyone who is fascinated by the sea and by relationships. Although it covers a long period of time in the boy’s life, the chapters are short and broken up by the colourful spreads.

It is a small treasure that should be on many bookshelves.

A percentage of sales from this book helps support the Australian Marine Conservation Society.