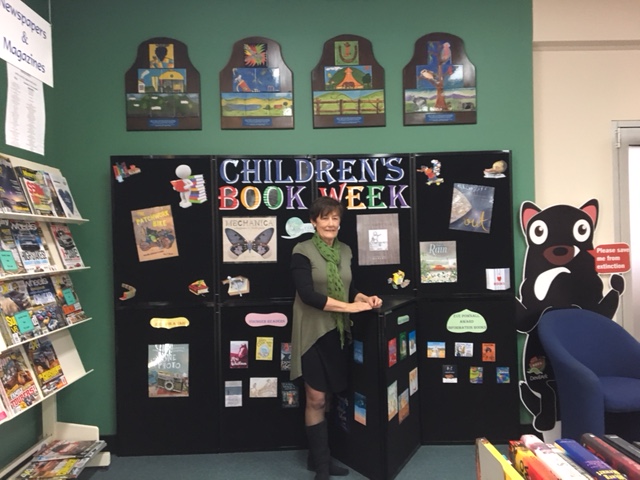 They were very little. Some came with their carers or mothers, accompanied by babies asleep in prams. They sat on the dinosaur mat in the library.

Two of the groups were local day care providers and in the first, only one of the boys was dressed up…as Batman The third group was larger and the costumes more varied, with little girls in pink Princess’s dresses, Frozen outfits, one Cinderella and one cute small Ladybird. The boys were less enthusiastic but there was a Bronco supporter and a Sheriff complete with oversize hat and badge.

I read Chip and The Snow Wombat and we talked about building snowmen and about eating fish and chips. One little girl came up very close to find the animals hidden on the page in the wombat book and they all knew about kangaroos, which abound in the Scone area. 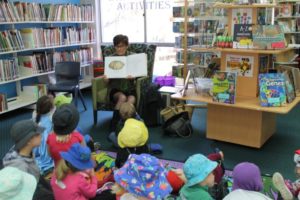 They sat and listened attentively, wide eyed, while I read three stories; I had chosen them earlier but when I saw the ages and attention span I did a quick impromptu grab for a book I saw on the shelves, a flip up book about farm animals dressing up. The kids loved to call out to tell me which animal they thought was behind the mask.

This summed it up really. ‘What’s special about this week?’ I asked. ‘What is it called?’ They all yelled out ‘Fancy Dress Week!’ And it was for them.  Not a book character in sight but a lot of Disney which probably indicates kids’ interests today.

Everyone got a stamp for good listening even the Bronco supporter who broke out at the end and tackled a few of his mates near him on the mat. He did not get to be the leader on the way home!

They all politely thanked me, then linked into the special handholds on the special yellow rope and with two leaders and two kids on each side, they wended their way back to Pre- School through the streets of Scone.

And I drove home ready for a nice hot cuppa.