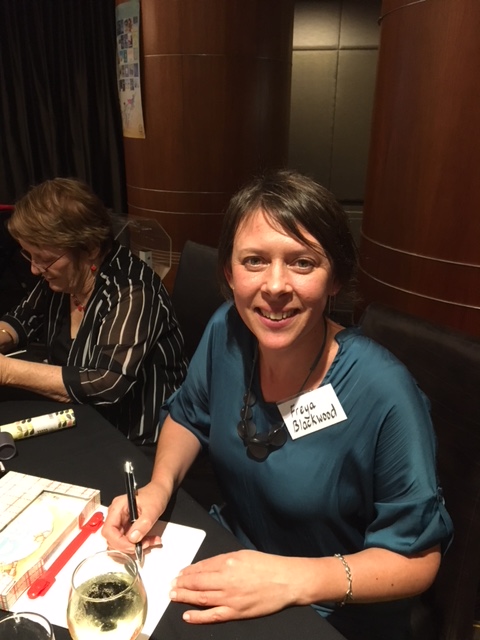 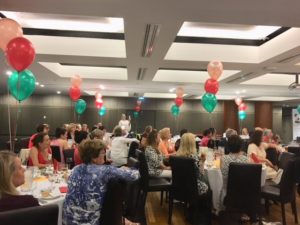 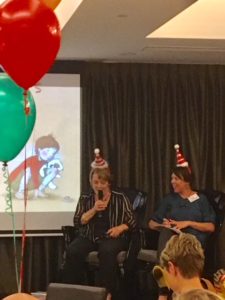 I had the pleasure this week of hearing Libby Gleeson and Freya Blackwood  at the CBCA Christmas dinner run by the Nth Sydney branch.

Libby has written over 40 books for children and teenagers and won many awards. Freya, as an illustrator appeared on the scene much later than Libby but she has had a great impact. In 2015 she won three awards, two of which were for books co-produced with Libby.

Together they have produced, Amy and Louis, Clancy and Millie, The Cleo Stories, Go to Sleep Jessie and Banjo and Ruby Red. Freya talked about how she is attracted to Libby’s words and how she had a visceral reaction especially in Amy and Louis. In return Libby said that she trusts Freya with her words and that she always understands what she is doing in the stories.

Freya’s path to children’s book illustrator was not linear. She was working in special effects on the Lord of the Rings trilogy when she decided that it was not enough; she too wanted to be special. Her mother was artist and although Freya had no formal training, her mother helped her experiment with colour and gave her lessons on colour theory. Freya’s use of colours was evident all around with room at the dinner, with balloons in Freya’s palette and Christmas bon-bons wrapped in Freya paper.

Both Libby and Freya talked about where their inspiration came from and it always came back to ordinary life, life with children, stories that ring true. Libby recounted the origins of Amy and Louis from a time when her children were at school and were parted from a friend, and many stories came from her memories of her two girls at play. Now she has an impending grand child to inspire even more stories.

Freya also says that her nine year old daughter Ivy is her brilliant reference material. ‘I don’t know what I’m going to do when she out grows childhood,’ she says. Freya lives near Orange and works in her shed out the back, a shed the real estate man called ‘a cabana’ and as a single mum, works in school time only.

There are many projects brewing for both these amazing creative woman and next year’s CBCA Notables and Awards will be exciting to watch.