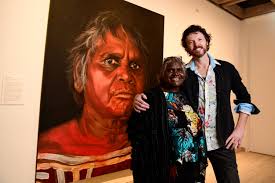 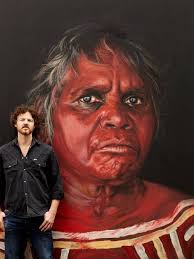 I have been travelling from my farm to the small town of Murrurundi, for nearly 20 years…for a yoga class.

It’s a special town for me, a town that attracts creative spirits.

As a freelance journalist, I have had the chance to write quite a few stories for the New England Living Magazine based on the artists in this town….Charlotte Drake-Brockman and her fellow artist Fran Watchel, Hannah Kay, Mandy Archibald and David Darcy.

David is the latest artist to call this town home but he came down from the mountains as an award winning photographer.

One Friday, I noticed a freshly painted building on the main road with the interesting name of Darcy and the Fox, so of course I popped in.

The studio displayed the wide range of books David has published about dogs as well as many of his award winning photographs.

But in the back I saw he had set up an easel and he had begun to paint.

He kept practising this new craft and finally last year had an entry ready for the Archibald Prize in Sydney. 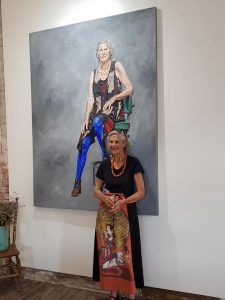 His portrait of Charlotte was a spectacular finalist and the painting has now been purchased by the Tamworth Regional Gallery.

This year, his subject came from a serendipitous meeting.

A woman from the remote settlement of Warakurna in WA,  stepped into his studio to have a chat. Her name was Daisy Tjuparntarri, an indigenous elder who is involved in many groups and enterprises.

She happened to be staying with a friend in Murrurundi and as they chatted more, they developed a connection. David gave her some canvases and paints to help her fill in her time away from home and then she agreed to let him paint her portrait.

Daisy applied the traditional red oxide (from the hardware store) to her face and chest as she would do in special ceremonies and this huge image of her now hangs in the Art Gallery of NSW.

When I popped in last Friday after yoga, David was tired but still elated.

His portrait had won the People’s Choice Award and he had dashed to Sydney for the presentation and managed to track down Daisy in the desert and persuade her to fly back.

The images of David and Daisy were all over the local media and the internet, Daisy flashing a wide smile and standing with pride beside the artist.

As I stood in the gallery last Friday, locals wandered past calling out their congratulations and waving.