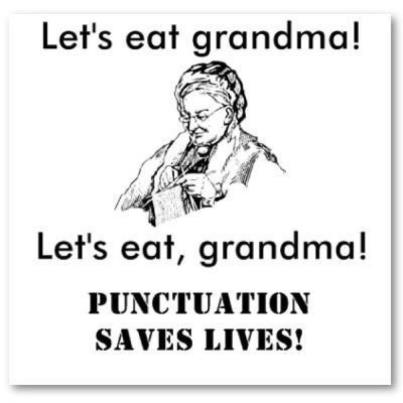 I feel as though I should have balloons and streamers everywhere because today is my day; not a birthday BUT International Grammar Day. I love grammar, spelling and punctuation and I squirm and groan when I see any of these misused or abused.

The day was apparently instituted by an American Martha Brockenbrough, who had had enough. She decided that all verbs, nouns, adverbs and adjectives deserved a special day when people stood up for them and refused to allow them to be abused.

No more would apostrophes be lost, forgotten or misplaced and the comma would not be abandoned. So she wrote a book, ‘The Things that makes us (sic)’ in 2008 to help spread the word.

I know there are those who say what does it matter? Who cares if the apostrophe is stuck in front of every ‘s’? We still get the meaning. But maybe not. Look back at the opening image in this blog. The whole meaning of a sentence can be changed by the inclusion or exclusion of one grammatical element. And the Nanas of the world become endangered.

I am delighted that the new school Curriculum is going to focus on writing skills and grammar again. If you peruse your local community Facebook pages you wonder if many of those posting attended an English class at all. I find it appalling (and lazy) and feel motivated to institute adult or youth literacy classes in the local town.

But beyond the local illiterate there is another issue that irks me and that is with professional journalists and writers. Often when listening to ABC radio, I hear mangled sentences where the subject and the verb are floating far away from each other and the story makes no sense. Or, as is the case in our household, we are forced to read captions on our TV screen, because my husband sat on one of the remotes and now we can’t work out how to remove the captions! (We are technically inept.)

The person madly typing the captions, can hardly keep up and extraordinary spelling and expressions appear so that the news broadcast degenerates into a comedy sketch. (I am sure that we will have this sorted soon.)

Every day in some newspaper I read articles that are badly written, or hurriedly written. In ‘The Australian’ last weekend there was a long piece by a well known, award winning journalist, in which semi colons were misplaced along with a host of other clunky errors.

I am also concerned about writers who blog and either do not spell check their postings or are not aware of grammar rules. How can they be persuasive and ask us to join their course or their workshop when they themselves use expressions such as ‘expertise is sort after’? It particularly worries me when I hear children’s writers talking to groups of children, and the word ‘youse’ appears. It is apparently the plural of ‘you’ (!) and is used prolifically in our rural area. I hear it all the time but I don’t want young children to hear it and think it is acceptable.

I know this is obviously a rant from an ex English teacher and sometimes I feel I am a lone campaigner and defender of the English language, fighting to treasure the power of the word.

So three cheers for Martha!