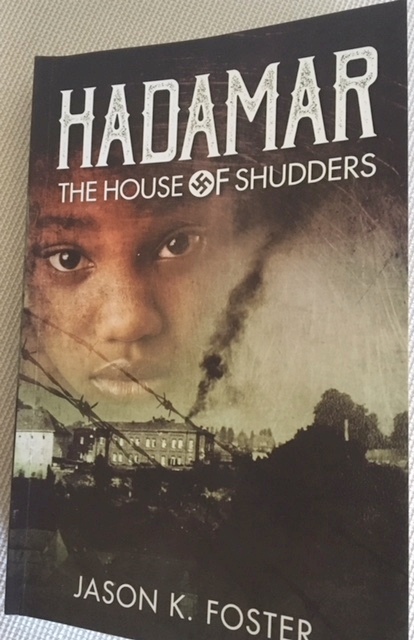 This is a work of historical fiction based on events that occurred in Nazi Germany from 1938-1945. It begins in 2017 as an old man called Johan Kapfler has a dying request. He asks his grand daughter to try and find a woman he remembers fondly from the days of the war, a woman called Ingrid Marchand.

The grand daughter agrees to the quest and tracks down Ingrid to a nursing home in New York. It is she who takes over the story and reveals all the details of her time in the psychiatric institution called Hadamar. Although she is now 93 she is persuaded to tell the story and she is not reluctant because she says the world needs to be reminded of what can happen when true hate is allowed to run free.

The author sets up the parameters of what proves to be a very harrowing story, full of graphic detail from the memory of Ingrid Marchand.

Hadamar was an actual place near Limburg in Hesse and an actual psychiatric institution. As is told in the story it was one of six sites used for the T-4 Euthanasia Programme, which performed mass sterilizations and mass murder of “undesirable” members of German society, specifically those with physical and mental disabilities. In total, an estimated 200,000 people were killed at these facilities, including thousands of children.

Hadamar was known as The House of Shutters maybe because its evil purpose was sealed off from the town but Jason Foster alters the descriptor to ‘House of Shudders’. He dedicates the book to his Mutti and the forgotten children of Hadamar.

Ingrid is a young girl of 14 who is forcibly taken from her home and sterilised because she is coloured and of mixed race. Not long after the Gestapo come to remove her permanently from her home and her mother agrees to sign the papers. The SS tell her although she does not believe the child has any illnesses, her colour is enough of a stain on her character .She is removed to the Hadamar institution and placed in a ward with rows and rows of beds full of scared children.

She watches on as more and more children disappear from the wards to be eliminated and later more are left to die of starvation. She even admits to betraying a child who told her in secret that she was Jewish. This girl is murdered because of this. As the war continues the institution is also used as a hospital for wounded soldiers and this is how Ingrid meets Johan, a decorated war hero.

The publishers note that this book can be a cross over between YA and adult but I feel that a warning note should be issued as the details are particularly gruesome. Ingrid reveals forced sterilisations and many are murdered by euthanasia injections while strapped to a crucifix bed. Ingrid sees many of these acts as well as being forced to cart corpses and also witness the gassing of children in the showers. Corpses are piled up when the cremation ovens can no longer be fired up and she even has to help cart the body of a woman who she knows is alive and participate in her burial in a communal grave.

The staff are inherently evil, with no redeeming features at all apart from Dr Oppenheimer whose motives for saving Ingrid are dubious and who is complicit in setting up the gassing areas. The author uses the actual names of the staff and at the end we see the trial of some of these and their punishment as the liberating Americans use Ingrid as a witness. Jason Foster uses many of the actual names of the staff who were later prosecuted and hung for their crimes.

Foster uses many German expressions to add to the sense of authenticity: they translate as Gnadentod (euthanasia) Lebensunweten Leben (a life unworthy of living) and Mischlinge (of mixed race) parentage and others but he provides a glossary of terms.

Ingrid tells her narrator (who is never named) that although facts about such atrocities are recorded in text books and on the internet, the impact of a first person story is powerful. And Jason Foster has certainly created a shocking account that although not an actual first person account it is a believable recreation of all the events that have been documented about Hadamar.

Ingrid Marchant says ‘in recent times America has become in many ways like Nazi Germany. The politicians have used mass media here in the same way the Nazis did-and an unpredictable man has come to power.’

It is a salutary tale told with the hope that we can learn from the evil and maybe create a better future.