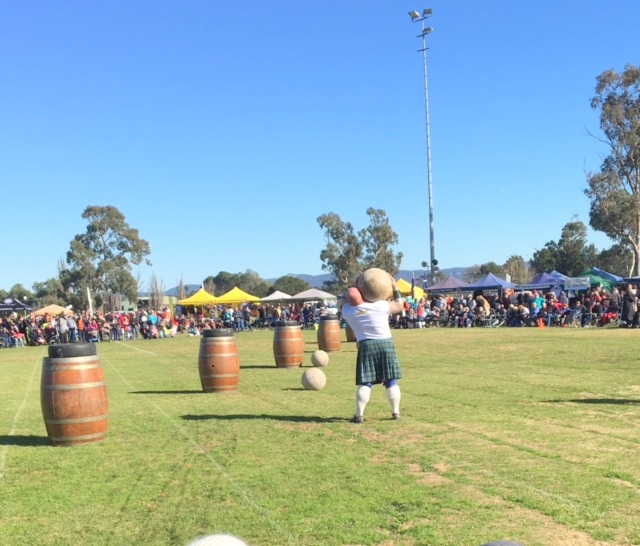 There is nothing quite as stirring as the sound of bagpipes and the swish of tartan kilts on a misty, frosty morning in the Upper Hunter Valley.

The town of Aberdeen is many kilometres from its namesake in Scotland, but the passion and enthusiasm of those who have Scottish heritage and now live in Australia, is unbridled and infectious.

This year was the 18th Aberdeen Highland Games and if the crowds were anything to go by, one of the most successful. The Chief of the Day was the Hon. Sandy MacDonald. He opened the Games as a fourth generation Australian Scot and he reminded the crowd that about 1.7 million people in Australia claim to have Scottish heritage and many live and work in the Hunter.

As the frosty air warmed and the Pipe Bands and Drums performed then marched off, it was time to see the grace and skill of the Highland Dancers performing on stage. In contrast in the centre of the oval, were sets of the most enormous calves and chests on mighty men, the Tartan Warriors. The team of four men participate in a traditional Celtic strongman competition over three events.

In front of the teams were five huge stones, looking like giant’s marbles.  These are known as the Manhood Stones and this is the first event the men compete in. The athletes compete against the clock to lift the 5 stones of increasing weight, from 100kgs to 165kgs, heaving them off the ground and placing them on the barrels.

The second event is the Sheaf Toss and the men have to toss a bag weighing about 7kgs over a bar, and the final test is the tossing of the caber. This event is said to have developed from the need to toss logs across chasms or rivers so as to cross them. A large wooden pole weighing about 79kg has to be tossed so it falls away from the thrower.

There were 21 clans represented at this gathering and many had stalls where visitors could check out their Scottish heritage and take home a tartan tie, a sporran or a clan cap badge.

As the sun set and weary strong men, tug of war teams and Scottish dancers packed up, it was time to get ready for the Ceilidh that night, complete with…you guessed it… a haggis entrée.