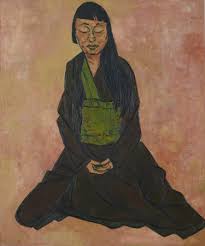 I happened to tune into Radio N 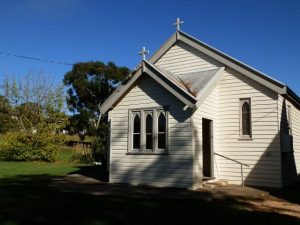 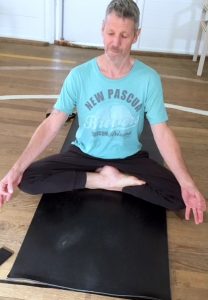 ational Art Show this week and heard Ed Ayres interviewing Tony Costa. He had just won the Archibald prize with a portrait of artist Lindy Lee.

She is seated in a meditation pose with eyes cast down. She apparently sat like this for six hours.

It is a picture full of silence and tranquility with mainly dark tones and a brownish background that has her almost suspended in air.

Today I practised mediation in an old church hall in the country, with yoga teacher John West.

No nothing to with the seafood John West, but John’s brand is True Blue Yoga, yoga with an Australian flavour.

We are a mixed group of women and men of varying ages and many of us have been practising yoga for decades.

Our poses and asanas have improved but mastering meditation is another matter.

We have to block out the rumbles of the coal trains that pass regularly and ignore the flies that pester us.

It is a hard discipline and as we are restored to reality by the singing bowl, we appreciate the short time of peace we have been afforded,