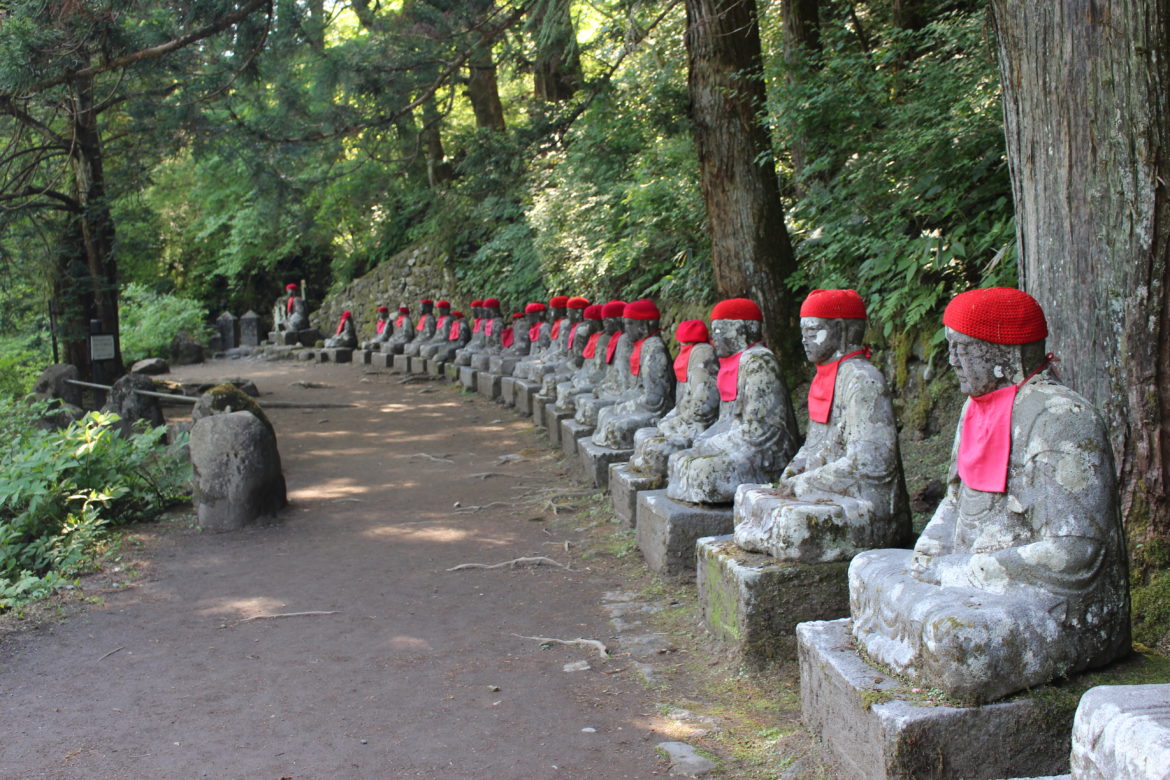 Yesterday I saw that a number of friends had posted a link to an article in ‘The New York Times’ by Angela Elson, titled ‘The Japanese Art of grieving a Miscarriage.’ It made me think again about the huge number of women who must be affected by the loss of a baby, either through still birth, miscarriage, abortion, premature birth or failure of an IVF treatment.

We talk about these losses much more openly now and hospitals provide support and caring in various forms. Mothers are able to hold their dead child and it is not whisked away as happened not so long ago. But we still don’t really have any form of memorial and many of these babies do not undergo a burial or funeral.

So I was interested that the NY Times article talked about the ritual of memorial in Japan…the statues dressed in bibs and caps that I also came across in Nikko while travelling in Japan.

I too, incorporated this idea into a story that was published online in the ‘Grieve’ writing competition run by the Hunter Writers Centre.

Here is my story.

On a recent trip to Japan we were very moved by the sight of rows of stone statues, ‘mizuko jizo’, dressed in red bibs and caps, all representing a baby that had been lost through miscarriage or still birth or abortion.

Beside the clear waters of a river outside Nikko, curving rows of these statues stand, quietly contemplating the journey across the water to the land of the dead. The women of the town maintain the outfits and make new ones when a mother requests a memorial to her lost baby.

I have no memorials to my lost babies and it took me 30 years until I was brave enough to sight the documentary evidence. The birth certificate said ‘Unnamed female, born 12th April 1974.’

In 1974 I was 27 years old. It was my first pregnancy. The afternoon of my baby shower, I felt sharp pains and when I undressed I could see bright red blood.

That night the baby was delivered and whisked out of sight.

My husband told me that the baby had not survived very long and I did not even think to ask if I could see her or hold her. It just wasn’t done in those days. I did not even want to imagine what was going to be done with her tiny body. The nuns had baptised her but she was nameless.

I lay in bed enduring after birth contractions and struggling to accept that I had nothing, nothing to show for all the pain. I could not wait to get home and shut the door firmly on the nursery, with its white bassinet and mauve and blue wallpaper.

Three years later we left for the UK, so my husband could pursue his medical studies. While we were in Bournemouth I suspected that I might be pregnant and it was confirmed. The doctor smiled and said, “I can hear two heartbeats.”

I went into premature labour at 26 weeks. The twin boys did not survive long and we did name them. But again I did not hold them or even see them.

Until the 1980s this was the policy of hospitals in Australia too and funerals were discouraged. Babies were buried in communal sites and usually only the Matron and gravedigger were present.

Times have changed and the grief suffered after such a loss is now sensitively dealt with by hospital staff and others.

The grief from an event such a long time ago, does not disappear, it just fades. We have never forgotten our babies and their short time in this world should not be dismissed as a non event, with no record and no memorial.