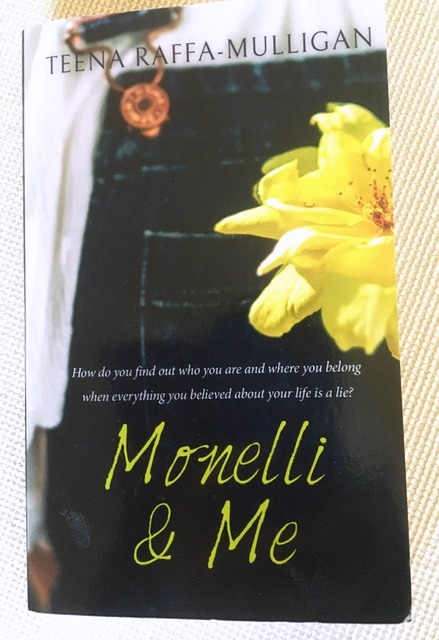 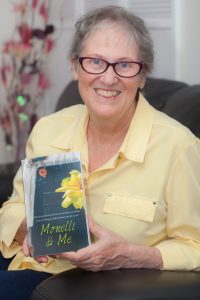 Review of ‘Monelli and Me’ by Teena Raffa –Mulligan

Teena Raffa –Mulligan has written many books for children and adults and worked as a journalist and editor on a number of publications. This is her first novel for YA readers. Now retired after a long career in journalism, she is enjoying the freedom to concentrate on writing fiction and having time for family while sea gazing from her home in WA.

This book feels good in your hand and has a well designed cover. The title in yellow script is echoed by the image of the flower and the alliteration of the title is eye catching.

The blurb on the cover announces the theme:

‘How do you find out who you are and where you belong when everything you believed about your life is a lie?”

This is at the core of this YA novel which centres on a 15 year old girl Kate Norton who lives in a seemingly happy family relationship with her mother, stepfather and younger brother.

Her happy family fantasy image is shattered when she has a call from a man who says he is her biological father, Nick Monelli. This bombshell opens the novel and hooks the reader immediately. Kate’s mum has never told her about this. Her wonderful dad Steve is not her real father and now there is a Father Pretender on the scene.  Kate also later learns that her mother has secreted all the cards and presents her father has sent to her over the last 15 years. It has been a very tight secret.

The story is told in first person and we stay in the head of the teenage girl very convincingly throughout the story. The voice is authentic and I found the story compelling and easy to read.

It is full of the angst of adolescence but the story is lightened by the romantic interest and Kate’s attraction to a boy at her school. Joshua Perrin is a good male figure as are all the males in this story including Kate’s stepdad and Nick, her biological father.

There is an effective contrast between Kate and her BFF mate Lisa, the blonde flirt with the nickname of Fizz. She comes from an irregular family set up too but they have all adapted and this is not a dysfunctional unit.

The shock of the sudden contact and then the actual physical meeting with her father is too much for Kate and she vacillates between being kind forgiving Kate and bitchy bitter Kate who hates the entire world. Much of her angst is conveyed in dialogue and also in Kate’s interior monologues which sound very authentic for a teenage girl.

There are echoes in Monelli and Me of Looking for Alibrandi written in 1992 by Melina Marchetta. The protagonist, Josie also struggles to cope with her teenage existence. She lives with her single mother, Christina, and attends a prestigious private school, where her snobbish classmates mock her Sicilian heritage. She contends with the dramas of teen romance, her attraction divided between two boys. When her family receives a visit from Michael, her mother’s former lover, Josie is overwhelmed when she discovers that he is also her father.

Looking for Alibrandi, explores identity and belonging as does Monelli and Me but the idea of class and social identity is more deeply explored in the earlier work.

Monelli and Me ends with Kate having to decide whether to leave her home in WA and follow her father to Brisbane. It will be a big step for her, marking her independence.

Kate grows and changes, becoming less self obsessed and developing  more empathy realising that the event of her birth had ramifications for many others including Nick’s mother, her other grandmother who has not had contact with her since her birth. Now Kate has the chance to establish that connection, to enlarge her world and explore her Italian cultural connections.

If Kate decides to go, because of the wonderful world of social media she will not feel cut off on the other side of the country, but is promised connection with her BFF friend and especially with Josh.

Towards the end of the novel, Josh says to Kate: ‘“Text me, call me, email. Facebook , Skype whatever. Seeya when you get back, Apple juice.” And despite the presence of a kid brother spectator, he pulled me hard against him and gave me the lingering goodbye kiss of my imagining.’

There could not have a more satisfying ending for YA readers!