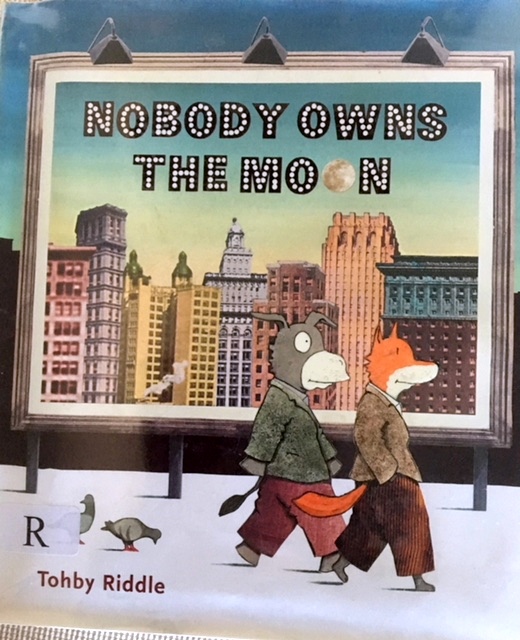 Nobody Owns the Moon

I feel quite a connection to the author and illustrator of this Picture Book, Tohby Riddle as his wonderful mother Jasmine used to belong to my country writing group.

The book is 10 years old but has themes that are timeless.

It was not what I expected. I think I thought it might be about two characters gazing up at the sky and contemplating their place in the universe.

Instead it was about a fox and a donkey who live in a big city, dwarfed by skyscrapers and illuminated by billboards.

The fox is called Clive Prendergast and he lives in a small one room apartment.He works in a boring repetitive factory assembly line but is at home in the city. His friend is Humphrey. a donkey who struggles, has no fixed address and can’t hold down a job. The two find some tickets to a theatre performance, a play called Nobody owns the Moon and enjoy a stimulating evening, weeping at the bittersweet ending.

This book reminded me of Gus Gordon’s Herman and Rosie, about an oboe playing crocodile and a jazz singing doe, who live in New York City. It is also about friendship, finding your tribe and a sense of purpose.

Riddle’s book is unusual in that his world is not peopled by animals; the fox and the donkey live in a world of people , who swarm around them as though they are invisible.

The title of the story is revealed by the cover and the billboard advertising the show. It is interesting to also connect with the American elements , as we may remember the planting of the Stars and Stripes flag in 1969. Due to a UN Treaty of 1967  the moon was declared a province of all mankind, thus no one can own it. It belongs to all.

Clive and Humphrey feel this sentiment about their city. ‘This is our town ‘, they declare and part giving each other a hug. I just hoped they were able to find more tickets to more shows!