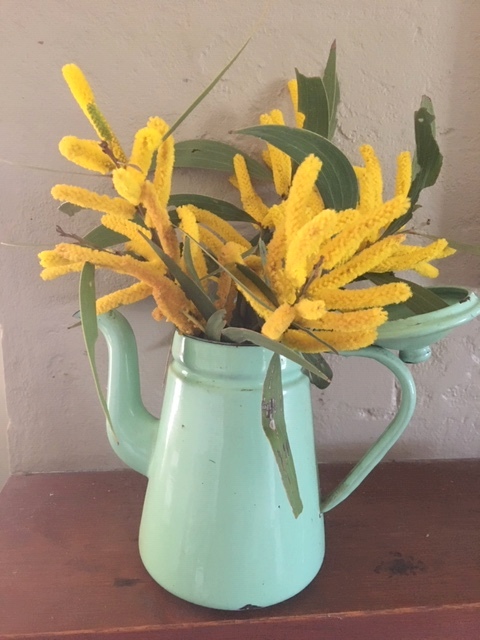 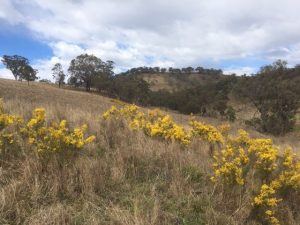 When I was a kid, my family went for a short holiday to the Southern Highlands, and we stayed in an old hotel. One night was set down as a fancy dress competition and parade and some families , who had been before, had brought costumes with them.

We had to be inventive.

I wore green shorts and top and mum pinned swathes of wattle over me. I carried a sign that said ‘Wattle I wear‘. I thought it was funny but I didn’t win. 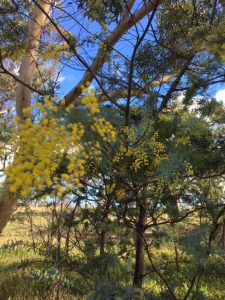 Now in the country we celebrate Wattle Day often. Acacias are native to Australia and the Pacific Islands are are a fitting emblem. The common name of wattle seems to be of Old English derivation relating to the wattle stems used to weave and form fences, walls and roofs. 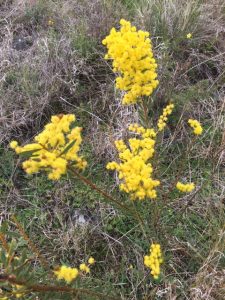 In August the Cootamundra wattles in our woodlot are covered in flowers and they last for ages. Aboriginal used to harvest the seed and grind them into flour or use them to bake a cake. You can now buy such wattle seeds from bush food companies, like @melbournebushfoods.

In our paddocks, there are yellow wattles springing up everywhere providing nectar for the bees and near the road leading from Scone, at Owens Gap, the land is dotted with the same variety, highlighting the hills.

I was drawn to a vibrant plant and stopped to take an image. It was a large plant, with huge caterpillar like flower heads and strappy leaves, a Sydney Golden wattle, a bit out of its territory. But just in time for Sept 1st. 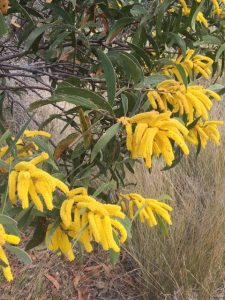 We have two other varieties in our garden, a longifolia and buxifolia, so as Spring races in, we always have bright patches of colour and the air is filled with their sweet perfume and the constant hum of the bees.