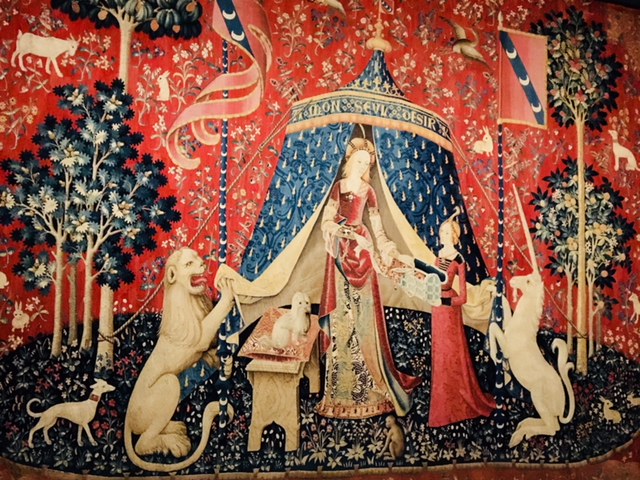 The Magic of Unicorns

Some years ago, when travelling in Europe, we were invited to break our trip and stay with some friends in Dijon. My friend pressed a paperback on me. It was Tracy Chevalier’s The Lady and the Unicorn, a fictionalised version of the creation, in about 1500, of the tapestries of the same name. 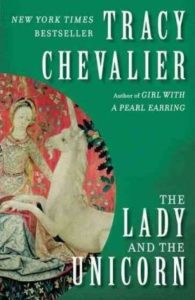 I read the book quickly and then my friend said that as we were moving onto Paris, we should go and see the tapestries, which were hanging a darkened room in the Musee du Moyen Age. This we did and were instantly entranced and felt the magnetic pull of the intricate works; they demand that you sit quietly and gaze upon them, admiring their balance and symmetry and the mystery of their iconography.

Now the tapestries are here in Sydney, at the Art Gallery of NSW while renovations are carried out at the Musee de Cluny in Paris.They are displayed in a similar small space with subdued lighting and you are led into the room via a hallway with the words of writer and poet Rainer Maria Rilke, who says ‘… there are six tapestries, let us pass slowly in front of them. But first of all take a step back and look at them altogether. Are they not tranquil?’

The tapestries are secular in their content, rather than religious and they explore the five senses, touch, taste, small, sound and sight culminating in the sixth tapestry, My Sole Desire, perhaps the sense of the heart. But apart from the symbols and the meaning, it is the workmanship that is bewildering beautiful. 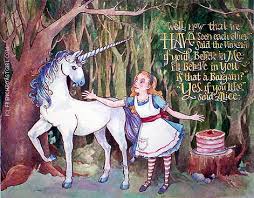 The backgrounds are in mille fleur style, meaning a thousand flowers and many of the plants trees and flowers are recognisable and not stylised. Dotted in the flower meadow are animals and birds, monkeys, lap dogs, crying rabbits and the repeated images of the lion and the ubiquitous unicorn. Chevalier admits to having a teenage obsession with unicorns and it seems that many children today are similarly obsessed, and unicorn themed birthday parties abound. Even Lewis Carroll’s Alice is quoted: ‘ Do you know, I  always thought unicorns were fabulous monsters too! I never saw one alive before.’ The unicorn replies,‘If you believe in me, I’ll believe in you.’

You leave the room with regret, turning back for one last look at the rich reds and blues, the pageantry and the beauty of the Lady and the Unicorn, tapestries created from the hands of many creative souls.