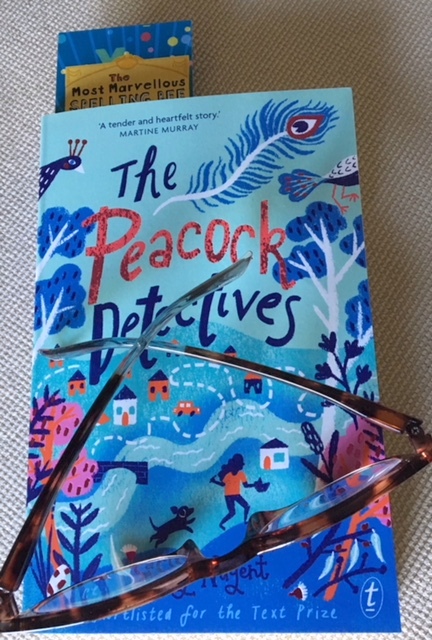 This middle grade fiction was short listed for the Text prize and is Carly Nugent’s debut novel. The cover by Sophie Beer is appealing, with touches of glitter and sparkle.

From the opening sentence, the text is simple and conversational. It is written in first person and we enter the world of Cassie Anderson with no preamble at all.

The voice reminded me of the voice from the Truly Tan series by Jen Storer which I have revisited recently. Cassie, like Tan is aged about 11 and she likes to solve mysteries, in this case the disappearance of two peacocks. Lists are used to break up the text and Cassie keeps details in her Notebook for Noticing which is the equivalent of Tan’s diary entries.

Cassie is an avid reader especially of mysteries and she is also passionate about words and their meanings and explains words such as ‘superfluous’ and ‘euphemisms’ to the reader.

The structure is simple, based around the seasons and covers one year in a country town. It begins in Autumn. The novel appears to be an investigation of missing items, ie the peacocks but develops into much more than this. 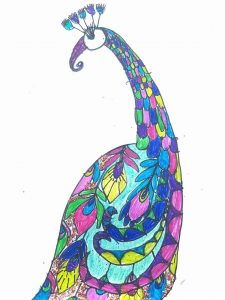 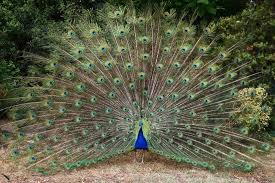 It explores issues of family breakdown, of belonging and of empathy with others. Things change dramatically in Cassie’s world over this year. Her father becomes depressed, her older sister explores Buddhism and moves outside to live in a tent, her grandfather becomes ill and her mother leaves home and has a brief affair.

This is explored while Cassie writes this story and all the elements of story telling are woven into the text quite self consciously. It is verging on meta fiction. Having completed quite a few writing courses, I followed the steps with interest, from the inciting incident…the disappearance of the peacocks, to the importance of noticing detail but ignoring superfluous facts, the use of dialogue, minor and major characters, use of the five senses, and figures of speech, like metaphor.

Like many writers Cassie is concerned that she may not know yet what her theme is and that at the end the reader may be disappointed in the climax. But she says, ’climaxes aren’t always noisy and dramatic. Sometimes they are quiet like a snake sliding under some stairs.’

She carries the doubts of many writers, struggling because writing is so hard and sometimes she just wants to quit. But when her father asks her, ‘ Why don’t you stop?’ she realises that all the time in the back of her brain a voice is saying ’WRITING WRITING WRITING.’ So she sticks at it.

The title is The Peacock Detectives, plural and the other detective Cassie enlists is her school mate Jonas, who is a great foil for her. He loves maths and science and knows the answers to many questions like, ‘Which is the only animal that never sleeps?’ He struggles to cope with the fact of his adoption and leaves to search for information about his birth parents. Cassie works out all the clues and like a good detective, she tracks him down and they return home safely.

By the end, many issues are resolved. The peacocks have bred, produced chicks and have been moved to a wild life park. (This is a great idea as my neighbour in the country has peacocks and I am glad she is many kilometres away as they can be very noisy).

Cassie has started secondary school. Her sister Diana has moved back home, her Dad is resuming a normal life and her Mum comes to visit often. Sadly her grandfather, who always listened to her stories, died at the beginning of the New Year.

Cassie has finished this story but is ready to start a new one.

‘How will it start it?’ asks Jonas.

I’ll write down everything I can until I find a story’.

And I knew I would. Cross my heart.

I am sure it will be great.