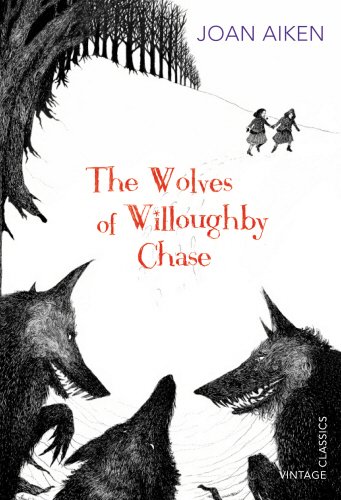 The Wolves of Willoughby Chase…Joan Aiken

This novel was published in 1962 by Jonathon Cape. It was one of the first full length novels Joan Aiken wrote and was intended as a spoof of the Victorian Gothic adventures Joan had read as a child. But it became inspiration for the series of ‘Wolf Chronicles’ that followed.

The wolves of the title appear in paragraph one…a great hook. The locals fear the wolves that have ‘grown savage and reckless from hunger.’

The manor house with its ‘joyous hubub’, is a contrast to the dark foreboding of wolves and the ‘sombre sighing of the wind and hideous howling’ beyond the house.

The story has so many archetypal elements:  two supposedly orphaned children Sylvia and Bonnie, a wicked guardian Miss Slighcarp, and even a Dickensian orphanage where the children are mistreated and starved. The importance of names is also a feature and the two girls are later given just a number when they are moved to the orphanage.

As I read it I was reminded of Sheryl Gwyther’s novel Sweet Adversity, which also begins with a supposedly orphaned child in an orphanage ruled over by a tartar, Matron Maddock. In both these stories we later find that the girls have not been orphaned at all but reports of the parent’s demise are totally false.

There is one terrifying episode in The Wolves of Willoughby Chase, where a wolf smashes through a train window and Sylvia is saved when a fellow traveller stabs it with some of the broken glass. It is very cinematic! However after a few more chapters there is no more mention of the device of the wolves and they fade into obscurity as the snow melts.

I think that all Scribblers will love the characters names…talk about magnetic words and Charming last names :Mr Gripe the lawyer, Mr Grimshaw, Mr Wilderness and Mrs Brisket as well as Miss Slighcarp of course.

The parents return from their travels to the South Sea, with the mother restored to health by citrus fruit and sardines.

The children, Sylvia and Bonnie,  settle down to bed in their silken sheets after their long adventures and you can feel a sequel coming on.