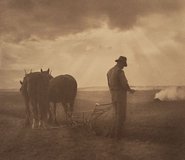 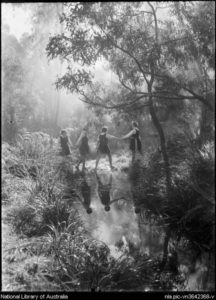 While I was exploring the impact of the horse in war, I came across a note about a well known photographer, Harold Cazneaux, who was born in 1878.

He was a pictorial photographer and he left a legacy of wonderful images, many displaying what he called ‘ truly Australian sunshine.’

Two images leap out at me. One is of a farmer ploughing his field with his sturdy workhorses and reflecting in silence on the peace that comes after war. Cazneaux was personally affected by war as his 21 year old son was killed at Tobruk in 1941.

The other is from ‘The Frensham Book’, of a group of schoolgirls in the bush around the school in the Southern Highlands of NSW. It looks for all the world uncannily like the images of the girls from the movie and book, Picnic at Hanging Rock. A six part drama series of Picnic at Hanging Rock is about to hit our TV screens.

A collection of Cazneaux’s images are held by The Art Gallery of NSW.